The Faridkot district is one of the seventeen districts and Faridkot town is an important historic town in the state of Punjab in North-West India. According to Punjab’s Geo-Area, Faridkot is a Malwa District. It is one of the biggest cotton markets in South-East Asia. The name ‘Faridkot’ is derived from Baba Farid, the famous religious lover of God whose Bani appears in the Sri Guru Granth Sahib. Faridkot stated from 1763 to 1947. The history of the Faridkot District pertaining to the ancient period has been traced to the Indus Valley Civilization. A few sites explored in the Moga Tehsil (Now a separate District) link it with Indus Valley Civilization sites explored in the Rupnagar District. A vast area, including the present area of Faridkot District, was under the influence of Indus Valley Civilization. The ruling dynasty of Faridkot State claimed descent from Rawal Jaisal, who founded Jaisalmer in Rajasthan in 1156. The town was founded in the 16th century by his descendant Bhallan of the Burai Jats. The ancestor of the Faridkot principality, Bhallan was an ardent follower of 6th Sikh Guru Har Gobind. 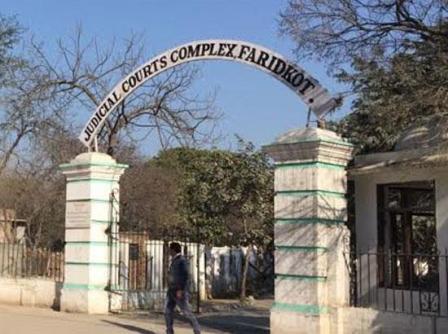 He helped the Guru Har Gobind Ji in the battle of Mehraj. He died issueless in 1643. Kapura, who was a nephew of Bhallan, succeeded him. Kapura founded the town of Kotkapura in 1661. Nawab Kapura was the Chaudhry of eighty-four villages. He was a Sikh but did not want to earn the ire of the Mughals and help Guru Gobind Singh Ji and fight with Mughals. The famous last battle of Muktsar (Khidrane Di Dhaab) now a historic town, happened after Nawab Kapura declined Guru Gobind Singh’s request to use his fort to fight Mughal Army. Otherwise, the last war between Mughals and Guru Gobind Singh Ji was destined to happen at Kotkapura. Guru ji moved from Kotkapura to Dhilwan Kalan from there to Talwandi sabo via Guru ki Dhabi. However, later in the battle of Muktsar in 1705, Nawab Kapuray helped Guru Gobind Singh Ji in an underhand manner. Kapura was slain by Isa Khan Manj in 1708. He had three sons named Sukhia, Sema, and Mukhia. Mukhia killed Isa Khan and took control of the entire area. Sema was also killed in this battle in 1710. Kapura’s elder son Sukhia again came into power in 1720. A dispute between the grandsons of Kapura (sons of Sukhia) led to the division of the state in 1763. The older brother, Sardar Jodh Singh Brar, retained control of Kotkapura, and his younger brother, Sardar Hamir Singh Brar, was given Faridkot. The state was captured in 1803 by Ranjit Singh but was one of the Cis-Sutlej states that came under British influence after the 1809 Treaty of Amritsar. During the Sikh wars in 1845, Raja Pahar Singh aided the British and was rewarded with an increase of territory. The state had an area of and its 642 square miles, and a population of 124,912 in 1901. It was bounded on the west and northeast by the British district of Ferozepore, and on the south by the state of Nabha. The last Ruler of Faridkot was Lt. HH Farzand-i-sadaat Nishan Hazrat-i-kaisar-i-hind Raja Sir Harinder Singh Brar Bans Bahadur. Before partition, there was a majority Muslim population in Faridkot. Faridkot has played a leading role in the politics of the state of Punjab with a number of chief ministers and even a president hailing from the area. Although the separation of Moga and Muktsar left this district considerably smaller, the area remains an important political arena. Faridkot is created Sessions Division on 01-04-1973 by Hon’ble High Court, which includes Sri Muktsar Sahib, Malout, Gidderbaha, and Moga its subdivisions. In the year 1997, Addition District & Sessions Courts start functioning in Sri Muktsar Sahib, and in the year 1998, Addition District & Sessions Courts start functioning in Moga. On 15-01-2010, Sri Muktsar Sahib has been starting functioning as a separate Sessions Division. Now, Gidderbaha and Malout are sub-divisions of Sri. Muktsar Sahib. Hon’ble Punjab & Haryana High Court established Moga as separate Sessions Division on 28-04-2012.T

When it comes to the selection process, the candidates have to take up a written exam / Interview. Selected candidates will be paid a handsome salary (as per Govt rules). The type of questions that are asked in the technical interview round differs from one position to another. There are multiple steps for the selection process for the posts of Stenographer, Clerk, Peon, Process Server, Gardner, Chowkidar, Liftman, Sweeper, Watchman, Chauffeur, Cook, etc. in the Faridkot District Court. The procedure is as follows

We advise to you for other Faridkot Court Recruitment 2021, How to Apply, Selection Process, Age Limits, and other details please read given here official recruitment notification carefully before apply online or Offline.

We wish you all the best for a better future.

Know the current status of your case by Return SMS

Important: Case Number Record (CNR) is a unique Identity Number of each case, which remains constant. All the Advocates, Litigants, and stakeholders are requested to ascertain the CNR of their respective cases from the concerned Courts and to refer the same for all future references.